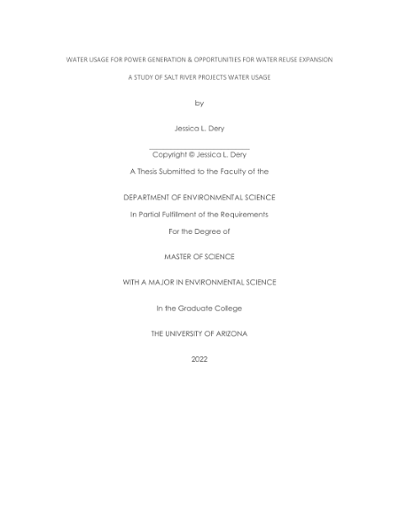 Increasing demands on limited water resources have made the use of recycled water an attractive option for extending potable water supplies. Recent actions towards the development of the Drought Contingency Plan require Southwestern states, and water users within the States, to develop a plan for more sustainable water usage from the Colorado River. Tasked with protecting the State’s valuable resources now and in the future, the Arizona Department of Water Resources (ADWR) regulates water users, including large-scale power generators, one of the largest waters, within the Active Management Areas (AMAs) through a set of Management Plans. Thermoelectric power generation, accounts for around 40 percent of total water withdrawals in the US; the largest volume of which is used for cooling (Dieter et al., 2018). While less than one percent of power plants in the US use recycled water, over 50 percent are located with ten miles of suitable reclaimed water supplies. By 2025, ADWR will require power plants that produce greater than 25 megawatts of electricity to meet a set of conservation requirements, including using zero liquid discharge systems and increasing cycles of concentration to reduce the volume of cooling tower makeup water. To incentivize the use of recycled water in power generation, the ADWR will provide exemptions for plants that beneficially reuse 100 percent of blowdown water from cooling towers or use reclaimed water for at least 50 percent of water used in cooling towers. The purpose of this study was to identify opportunities for enhanced use of recycled water in power generation, specifically for a fleet of generating stations owned and operated by the Salt River Project (SRP). To help protect the State’s fresh water supplies, the Salt River Project (SRP) developed a set of Sustainability Goals, highlighting the need to increase the use of recycled water to become more water resilient. Action plans include, but are not limited to, reducing total groundwater mining in the State’s AMAs. Within the State’s five AMAs, reclaimed water production is estimated at 140,000 million gallons per year (MGY) of which only 25,000 MGY is used in power generation, the majority going to the Palo Verde Nuclear Generating Station. Because water and energy are inextricably linked, each relying on the other for production through to distribution, the adoption of this untapped potential can facilitate a more water resilient future for SRP. Each SRP station was paired with one to three WRFs within a 25-mile radius. To evaluate potential partnerships, water usage and water quality needs of each station were assessed and compared to discharges from paired WRFs. Water usage data for cooling towers, spanning three years (2017-2019) for each station, was collated from the Energy Information Administration (EIA). Additional water usage and water quality data was obtained directly from each of the stations. Using a variety of sources, data from twelve WRFs were used to estimate potentially available reclaimed water based on volumes of produced treated effluent not already allocated for reuse and were used as the basis to identify and prioritize potential partnerships. Total facility-wide water withdrawals, including groundwater, surface water, and recycled water, for all seven stations averaged 10,000 MGY. Average annual total groundwater withdrawals are approximately 7,600 MG (76%), surface waters 2,100 MG (21%), and recycled water 280 MG (3%). Groundwater withdrawals within the AMAs, used specifically for cooling towers, reaches nearly 3,000 MGY. While the goal of SRP is to reduce groundwater withdrawals within the AMAs by 8 percent (a reduction of 240 MGY), the potential for much greater reductions is possible. Of the seven SRP stations assessed, five were identified as having the potential for reuse opportunities with at least one of the paired WRFs within a 25-mile radius having a supply of reclaimed water that met or exceeded the demand. The analysis indicates, based on distance and volume of supply, that recycled water could augment at least 35 percent of groundwater withdrawals (a reduction of nearly 1,050 MGY) within the AMAs alone. The potential for expanding reuse to augment all freshwater supplies, within and outside of the AMAs, is also possible and should be further investigated. This study was a first step in identifying potential reuse partnerships between SRP and WRFs in Arizona. From this work, a report was provided to SRP and includes the full water usage and water quality assessment of the fleet of generating stations and WRFs, identified gaps in SRP data management and communications and recommendations for improvement, limitations to the study, challenges to reuse in power generation and recommendations to overcome them, and key next steps. In addition, all raw data was transferred to SRP. While there are many considerations for using recycled water in power generation, including water availability and quality; distance and geography between supply and demand; system requirements; and cost and regulatory requirements, the main objective was to provide SRP an overview of the fleet’s total water demands and water footprint to use as a framework to identify priority areas and viable opportunities for potential reuse partnerships with WRFs.