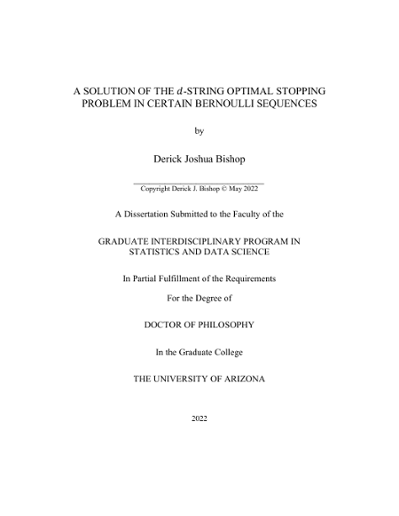 In this thesis, we focus on the construction of an optimal stopping time τ that bestows the greatest probability of identifying the index at which a specific pattern of 0’s and 1’s terminates for the final time within an infinite sequence {I_n }_(n≥1) of independent, but not identically distributed, Bernoulli random variables. In particular, we concentrate on the occurrences of patterns of the form 100⋯001. Since these strings are fully determined by the fixed nonnegative number of consecutive 0’s spanning the initial and concluding 1’s, they are often termed d-strings in the literature, in which the natural number d represents the waiting time until the second 1. As an important application of the general theory that we will develop, we shall examine the d-strings that appear in the Bernoulli sequence {I_n }_(n≥0)={Bern(a⁄((a+b+n-1) ))}_(n≥0), where a>0 and b≥0. Such sequences arise quite naturally in a range of settings, such as in the study of records, rank order statistics, uniformly generated permutations, and Ewens sampling, as well as within the context of Dirichlet processes in theoretical statistics. In a paper published in 2010, Shoou-Ren Hsiau derived the form of the optimal stopping rule τ corresponding to the terminal index of the final 1-string in a Bern(a,0) sequence. In the special case a=1, Hsiau has therefore calculated the best possible stopping time among those targeting the last “consecutive record” 1-string pattern 11 associated with an arbitrary sequence of i.i.d. continuous random variables. We shall generalize Hsiau’s result considerably, showing not only that d-string optimal stopping problems related to Bern(a,b) can be solved for every d∈N, a>0, and b≥0, but also that—just as in the particular case considered by Hsiau (i.e., in which d=1 and b=0)—the associated optimal rules are of threshold type. Furthermore, our proof of this assertion yields a characterization of the threshold in terms of a, b, and d—one that can be computed by any standard mathematical software package. Finally, we investigate the asymptotic tendencies both of the threshold t_(a,b) and of the success probability P(T=τ_(a,b,) ), establishing that 〖lim_(a→∞)〗⁡〖t_(a,b)⁄a^2 〗=1 and that 〖lim_(a→∞)〗⁡P(T=τ_(a,b) )=e^(-1), yet again precisely as in the special case considered by Hsiau. Accordingly, the principal results obtained in this thesis represent substantial generalizations of the results featured in (Hsiau, 2010), typically exploiting entirely different methods of proof than those employed in Hsiau’s paper. To the best of our knowledge, these results are the first specific facts to appear in the literature pertaining to a general type of pattern of 1’s and 0’s in a Bernoulli sequence related to a records process.