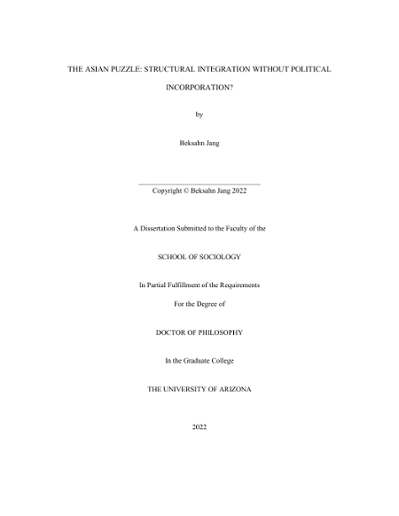 It has been widely found that Asian Americans, despite their relative economic and educational success, lag behind other racial groups in their levels of political participation (Uhlaner, Cain, and Kiewiet 1989, Lien 1997, Krogstad 2014). This dissertation seeks to evaluate the continuation of this empirical pattern into the 21st century, statistically evaluate the impacts of alternative explanations, and identify new potential mechanisms through interviews. Study 1 seeks to address the question of whether or not the voting disparity between Asians and other racial groups has continued into the 21st century, using 11 biannual waves of the Current Population Survey between 2000 and 2020. Despite the increased length of stay of earlier immigrants and a large number of Asian immigrants moving into the second generation, Asian voter turnout disparities endure, even controlling for income and education. Moreover, when restricting the data to foreign-born respondents, it is clear that Asian voting disparities are also present relative to immigrant-only groups with other racial backgrounds. Study 2 seeks to test new approaches to the puzzle via group consciousness and political socialization measures using the 2016 National Asian American Post-Election Survey. While group consciousness measures have a significant effect on voting, political socialization measures are largely insignificant. Despite the significance of these findings, Asian respondents continue to exhibit a significantly lower likelihood of voting relative to other racial groups, particularly Whites. Rather, the disaggregation of Asian into national heritage subgroups demonstrates the high internal variation of Asians’ political participation and acts to validate closer analysis on this basis in study 3. In study 3 I seek to uncover some possible new explanations to the enduring question of Asian voter turnout. To do so, I conduct 84 interviews with Japanese, Chinese, and Indian Americans in the greater Los Angeles area. Two frameworks for findings arose. First, immigrants are dually embedded in that their behavior is shaped both by the lessons about political engagement learned in the sending country and the context of their reception in the U.S. As immigrants, they emphasize the importance of prioritizing economic stability for their families while experiencing fairly few sources of new political socialization by either the US government or other potentially mobilizing organizations. For nonvoters, politics may seem either a distraction from these priorities or even as potentially threatening activities. Second, Japanese Americans’ narratives of political mobilization after WWII and internment suggests a threat hypothesis of political mobilization. Narratives of early generations of Japanese Americans depict a similar mentality of trying to “make it” while avoiding contentious politics, while the current third generation speaks more openly about the mobilizing role of historical events in their narratives and the ways their own political awakening intersected with the Civil Rights Movement and Vietnam anti-war movement. The contrasts suggest the powerful role of overt threats to economic and bodily security as the triggers for political mobilization in the U.S. Finally, in the conclusion, I look at common theoretical elements across the three papers, drawing together the three areas of study in studies 1 and 2, namely civic skills, political socialization, and group consciousness, and relating them to the way they were reconceptualized in the interviews in study 3 as civic tool kits, habitus, and group position, respectively. Readdressing each of these three areas using the nuanced findings in the interviews provides insights into how they operate in the experiences of specific Asian American heritage groups. Finally, returning to the resource model, suggestions are provided for the ways in which it can be amended to better incorporate the pattern of Asian American political participation.