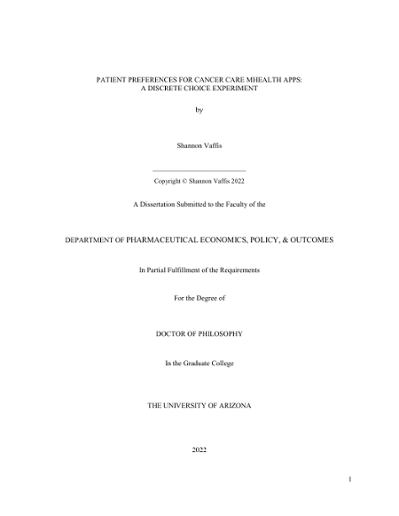 Background: It has been argued that mHealth apps could bridge the gap between direct provision of patient care services and patient self-management of oral oncolytic therapies. The ability of non-regulated one-way communication apps can be studied for their impact on patient disease self-management decisions. The purpose of this project was to explore whether discrete choice methods, such as a choice-based conjoint exercise, could be applied to discern patient preferences for the features of mHealth cancer apps for disease self-management. While the major portions of this work were hypothesis generating, we did set the following hypothesis:There is no difference in the relevance of attributes and levels for features of cancer self-management mHealth apps with respect to patient preferences. Methods: As the purpose of this study was to explore the depth and breadth of research on mHealth app features for cancer self-management, a scoping review methodology was adopted for this study. Four databases were used for this review: PubMed/MEDLINE, EMBASE, CINAHL, and PsycINFO. Citation and reference searches and a gray literature search were conducted. Data were extracted from articles including cancer type, mHealth app features, and patient preferences. The features listed for each app were compared, highlighting similarities across platforms as well as features unique to each app. The 40 app features identified in the scoping literature review were collated into groups according to their function. This resulted in nine groups and these groups formed the basis of questions for the expert opinion survey. Participants were asked to endorse each feature deemed useful for patients in cancer self-management. After each question respondents were asked to contribute additional app features related to that group which might also be useful to patients. The data were analyzed to determine the attributes with the highest relevance for mHealth apps for cancer patients according to the subject matter experts (as measured by lowest composite score when a rating of 9 out of 9 is the most relevant). A survey containing a choice-based conjoint exercise was utilized to reveal patient preferences for the features we previously identified in mHealth apps in the literature. The choice exercise consisted of nine choice tasks in which respondents compared the features of hypothetical mHealth apps for cancer self-management. This analysis utilized a latent class multinomial logit model to identify different segments (groups) of respondents based on response patterns. Results: In total, seven studies published from 2017 to 2021 were included for analysis. Additionally, apps were developed to address the needs of a heterogeneous patient population; some address the needs of a single cancer indication or treatment, and others provide support across the spectrum of cancer diagnoses. Likewise, the number of features per app varied from two to eleven with a median of four – with the most reported feature being a symptom tracker. Lastly, several studies reported patient acceptability or preference data for the app and/or the features with acceptability (assessed through survey or interviews) most frequently reported. However, these apps and features are often developed with little input from patients. Additionally, there is little information regarding patient preferences for the features of existing apps. A total of nine experts responded to the survey. Only two questions included features that were not endorsed by seven or more participants. Each category of features was accompanied by an open-ended question allowing the respondents to introduce features not identified in the literature. The patient survey showed contrasts in respondent preferences depending on question format. In addition, latent class analysis revealed evidence for a two-group model. In the rating scale question in the introduction of the survey, “Calendar” was the attribute which received the highest percentage of respondents reporting that the attribute was “Very useful” (n = 80, 72.7%) while “Symptom tracker” was rated lowest (tied with “Education”), as only 70 respondents (63.6%) considered this attribute “Very useful”. However, in the LCA both groups 1 and 2 indicated the highest preference for the “Symptom tracker” attribute (in Group 1 this accounted for 30.4% of total attribute importances and in Group 2 it accounted for 31.4%). The latent class analysis revealed only one statistically significant difference between Groups 1 and 2. Respondents who identified as Hispanic, Latino, or of Spanish origin (n = 13) were all in Group 1. Conclusions: The objectives of this formative research were to demonstrate whether discrete choice methods were fit-for-purpose in determining patient preferences for mHealth app features through expert opinion and patient surveys. The choice-based conjoint patient survey revealed there are differences between patient groups for preferred app features. Based on these outcomes, we are able to reject the null hypothesis that there is no difference in patient preferences for features of mHealth apps for cancer self-management. There are findings from this research that warrant further exploration. When asked with a rating question how useful app features would be, both experts and patients selected “Calendars and planning” (in the expert survey) or “Calendar” (in the patient survey). This differed from the outcome of the choice-based conjoint exercise in which both groups of patients in the latent class analysis model rated “Symptom tracker” as the attribute of highest importance. More research is needed to define methodologies best fit for purpose in understanding patient preferences.