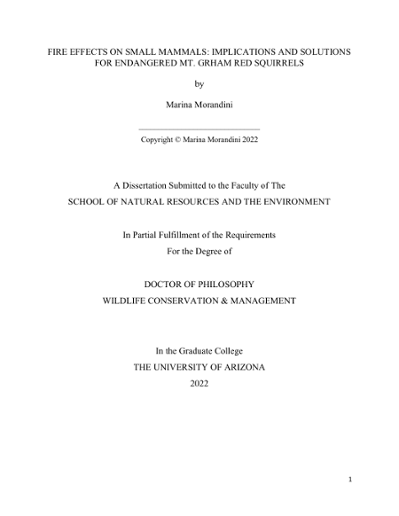 Climate change has already impacted biodiversity worldwide by shaping species habitat range, their survival, resource availability and interactions among species. Climate change is also the cause of more frequent extreme weather events, including wildfires. These cause profound challenges for animals to overcome, especially forest-dwelling mammals, due to reliance on specific vegetation types. We studied the impact on small mammal foraging behavior of Frye Fire that in 2017 burned 20,000 ha and ranged in elevation from 1,219 to above 3,000 m. Different burned severity affects perceived predation risk, reflecting in the amount of time spent foraging by small mammals, where in completely burned patches, small mammals spend less time foraging than partially- and non-burned patches. Fires affect foraging behavior of small mammals but does not impact all species in the same way. Generalists, such as Peromyscus sp., seem to forage across all burn severities, while specialist species, such as tree squirrels, including the endangered species Mt Graham red squirrel (Tamiasciurus fremonti grahamensis), tend to avoid the completely burned patches. The fire caused a drastic decrease in the abundance and distribution of the endangered Mt Graham red squirrels. This made necessary the need for studying translocation techniques to identify factors that could lead to improving the chances of success by potentially augmenting the population from ex situ bred stock. We used a surrogate subspecies, Tamiasciurus fremonti fremonti to test different translocation techniques to inform potential management actions on the endangered Mt. Graham red squirrel. We fitted VHF radio collars to 54 animals, and we monitored their survival and movements until individuals settled on a new territory. Survival probability averaged 0.48 after 60 days from the translocation event and was not affected by season or translocation technique; 54% of the mortality was caused by predation. Distance moved and number of days to settlement varied with season, where winter was characterized by shorter distances (average of 364 m in winter versus 1752 m in fall) and a smaller number of days (6 in winter versus 23 in fall). We also analyzed the movement and habitat selection of the animals after translocation. The importance of understanding dispersal behavior in reintroduction biology is well recognized to improve conservation translocations. However, few studies have accounted for differences in behavioral state, even if they can substantially change conclusions on post release habitat selection. Post-release movements of translocated red squirrels represent at least two different behavioral phases characterized by differences in movement patterns and the scale of selection for environmental features. During the first phase (hereafter “exploratory phase”), squirrels made long rapid movements and selected areas with taller trees and valley bottoms at relatively broad spatial scales (i.e., 500-600 m). In contrast, during the second behavioral phase (hereafter ‘settlement phase’), squirrels appeared to act like resident squirrels by displaying shorter movements within a smaller area, caching food, and defending their middens. Squirrels still selected primarily forested areas in valley bottoms and fewer conspecific middens, but the scale of response was much lower that during the initial phase. Translocated squirrels select areas with fewer conspecifics, highlighting the importance of considering the role of conspecifics, as well as environmental features, also in translocations of solitary species.