Impacts of Artificial Warming on Vegetation and Soil Fungal Communities in Two Sites in the Cruz-Verde Sumapaz Paramo Complex, Colombia 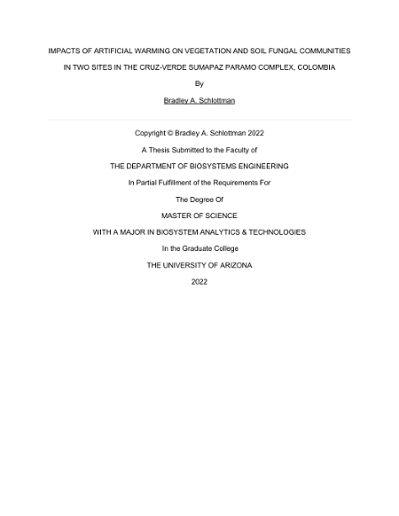 Background: Similar to its impact on high latitude boreal and arctic ecosystems, climate change is predicted to also alter high-elevation ecosystems such as páramos: Andes alpine ecosystems that contain vast water and soil carbon reservoirs that harbor up to six times more soil carbon compared with surrounding lowlands. In particular, warming temperatures due to climate change are predicted to accelerate the release of stored carbon from soils to the atmosphere via microbial respiration, yet to date few studies have examined the impact of warming on páramos vegetation, soil properties, and soil microbial communities. Methods: As part of a larger study examining the impact of artificial warming in two páramo sites in Colombia (Sumapaz and Matarrendonda), this study re-analyzed two years of vegetation and soil survey data in conjunction with Illumina ITS nrDNA amplicon sequencing of soil fungal communities to assess (i) the impact of the warming treatment on the richness and composition of plant, lichen, and soil fungal communities, as well as on edaphic parameters in each site; (ii) differences in biotic and abiotic factors between sites; and (iii) how biotic and abiotic factors in both sites changed over the period of the experiment (2016-2018). Comparisons accounted for the non-independence of experimentally warmed and control plots in each sampling block using paired t-tests. Results: Paired t-tests of warming treatment vs. control plots revealed that experimental warming did not significantly alter per plot soil properties, air temperature, or vegetation or soil fungal richness in either site. The two sites had different plant and lichen richness and composition, as well as climate and soil properties: Matarrendonda is characterized by warmer temperatures and increased precipitation compared to Sumapaz, as well higher soil gravimetric water content and plant and lichen richness at both the species and family levels. However, in both sites no correlations were observed between vegetation or fungal species richness with soil properties or temperature in 2016 or 2018. Despite differences in fungal soil community richness between sites, communities in both sites had similar phylum and species-level composition. From 2016 to 2018, plant and lichens richness, as well as soil bulk density and gravimetric water content increased in both sites. In Matarrendonda, increased vegetation richness was positively associated with changes in pH and negatively associated with changes in gravimetric water content over time. Mean soil fungal richness decreased over time in Sumapaz, but not Matarrendonda. The composition of fungal communities changed over time, associated with increased differences in soil properties between sites. Discussion. Here, we found that experimental warming treatment had little impact on biotic or abiotic properties when paired treatment and control plots were compared. Although fiberglass open-top chambers have previously been used to artificially increase soil warming, previous studies also have noted few effects on vegetation or soil microbial communities in the first years following their implementation. Here, despite no impact of warming we found that over the two-year period both sites experienced increases in plant and lichen species and family-level richness, as well as altered soil properties and more distinct fungal communities. Overall, additional studies are needed to address changes in the function of páramo vegetation and soil fungal communities over longer time periods, as changes in certain groups of soil communities may severely impact carbon cycling in these important ecosystems.